Wow - it seems like it was just the other day I did the WC Blog, and then shot off to South Africa for a holiday - but it turns out it was actually 5 months ago... just shameful really.

To be honest - one of the reasons I didn't blog was I forgot how to log on :) hee hee damn thats blonde - but it finally dawned on me to post a comment on someone elses blog and the log in page comes up... soooo if you get a random unrelated comment from me... sorry I abused you :)

Another reason why I haven't blogged for so long was because well - I didn't find my stories or life or anything I had to say to be very cheerful nor interesting - it probably still isn't - but I did enjoy getting some things off my chest and I found that once I had typed up my rant or whatever and clicked post - VOILA - I felt like a weight had been lifted - so yip - you're all gonna be subjected to more random crap from me... :)

Lets see - whats been happening over the last 5 months (seriously that long???)

* Went to Cape Town for a 2 month "holiday" - and I say holiday in inverted comma's cause it was touch and go if I was gonna come back to Oman :) But I did - I'm back and loving it still :) 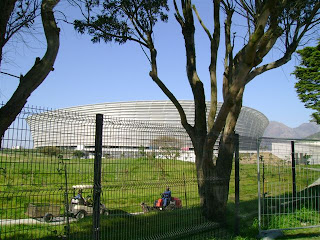 The WC Stadium in Green Point

* Went to Green Point WC Football Stadium - did the whole fan walk, waterfront, drinking in the atmosphere kinda thing - all I can say is - it was AWESOME! I am truly impressed with the way South Africa presented the WC - I really did not believe that we would be able to host such an event without some major mishaps - but I think I can proudly say - we did it! Okay well I cant say the Bafana Bafana did it - but I think SA can be proud none the less! :) And as a side note - if it wasn't for my brother I think I would have landed up in jail for GBH - there we were watching RSA vs France in a pub (as you do...) when some really drunken idiot decided to blow his Vuvuzela RIGHT IN MY BLOODY EAR - After the 4th time of me telling him to go blow it outside or away from my ear - I was ready to lay into him - but thankfully my brother held me back... Damn those things are irriating... esp. at 5 in the morning :) 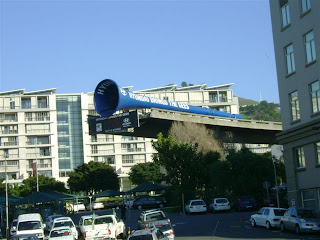 The Vuvuzela that was blown in my ear a few times ;)

* Fatty - well in reality I can no longer call him that - it's more like a teeny bit tubby now - is back in School - Thank goodness - granted we had to sell our last asset to pay off last semester and this semester - but honestly - whilst we did manage to make progress in home schooling - it wasn't easy and then of course I couldn't go out there and get employment cause I was home bound... but he's back at school and loving it - and I am doing all in my power to ensure he stays there. :) fingers, toes, legs, arms crossed!!

* Seems whilst I was away I lost a few friends... it saddens me - but what can you do? There's a long complicated story around this issue - but I decided that I would play ostrich and bury my head in the sand - then I don't have to know the sorbid details - nor do I have to take sides. Not sure if thats the best thing to do - but the alternative would be to sit all parties down and try to hammer out the problems - I'm not sure if I have the guts... oh well will see what happens...

* Tubby has decided on his first after school activity - a team sport - FOOTBALL - it's the first thing he has really wanted to do and he is so enthusiastic it's cute! I wanted him to play rugby - because it's not a sport I played - well okay I played a match or two - but it wasnt for me - those other woman WERE MASSIVE! - but I thought if he picked a sport I didn't play I wouldn't become one of THOSE mom's shouting from the sidelines, because I didn't really know the sport - but NO he didn't want to - he wanted football - and now I have realised I AM one of those mom's - but football is in our family - my mom managed the western province team for a season and my sister-in-law is a springbok player and a qualified ref - so just standing on the sidelines and looking good is not for me - after lasts weekends match I think it wont be long before I get banned tho' :) But it is cute to watch all these youngster being so enthusiastic and them all believing they are the next Rooney or Beckham or Pienaar (he's a Bafana Player - geez why is it no one knows the Bafana players... hee hee!)

And thats about it really,
guess I better get back to work...
but now that I've broken the fast - here's hoping it wont be 5 months before my next post...
Anyway till next time...
xx
Posted by Gatvol in Oman at 9:42 PM